skip to main | skip to sidebar

I need to choose a dissertation topic...

So, the final year of my theology Masters (with Westminster Theological Centre) has begun and a big chunk of the work this year will be on a dissertation. I have to write 16,000-20,000 words on... well, on pretty much whatever I want, as long as it's got something to do with Christian theology!

I've got a few ideas, which I need to develop into a detailed proposal over the next few weeks. I guess I'm writing this post to help me straighten out my thinking and get me moving towards that goal. So here goes with my ideas...

Firstly, I'm really interested in what people call simple church, organic church, or various other names. Church where the meetings are fairly (or completely) unplanned and people all have the opportunity to share what they feel would be encouraging and inspiring. It's obviously not your standard way of 'doing' church but there are glimpses through Christian history of Jesus' followers meeting together in something like this way. And there are groups across the world now gathering like this, in places like cafes, homes, sports venues, offices; wherever people meet, really.

The problem is, I need a clear focus for the dissertation. Something like 'Current trends in simple church fellowships' would probably be far too vague. We've been told our topic has to be narrowed down in some way, such as looking at how a particular biblical author tackles a certain issue. And nothing is really leaping out at me, in terms of an angle or focus on the simple church movement.

Which all leaves me with option two.

As many of my friends know (thank you for your patience, friends!), I have a thing about sermons. In many Protestant churches, certainly the more evangelical ones, the sermon is the centrepiece of the Sunday service. The minister or whoever's speaking will spend a lot of time preparing their talk, and then all the congregation will listen (or not...) for half an hour or more. That's a lot of cumulative time! But to what end?

Basically, it seems to me that sermons are intended for two main purposes; encouragement and teaching. The former purpose, I can thoroughly go along with. I've been inspired, challenged and spiritually re-invigorated by plenty of talks over the time I've been a follower of Jesus. Some people clearly have a gift of speaking to groups and imparting a fresh vision of the joy and adventure of being involved with God's kingdom and plans.

But, again it seems to me, many sermons – perhaps most – have the goal of teaching people about something or to behave differently in some way. And this points towards the second potential topic for my dissertation. Are sermons the most effective way of teaching people? What other ways might work? Are there examples of churches teaching, training and discipling their members effectively; how are they doing it?

I'm thinking about drawing in some ideas from educational theory, because it seems that most churches pretty much ignore what educational researchers have to say about how people learn. I don't think this should be so; Christian musicians don't ignore music theory; Christian counsellors don't cast aside everything that secular counselling and psychotherapy have to say. Don't get me wrong, I'm not suggesting that Christians should embrace without question everything that comes from the secular world. But I really like the idea of investigating how stuff like learning styles, blended learning and peer learning might be of benefit in the church context as we help each other along the path of apprenticeship to Jesus. It just doesn't seem right that most churches rely on a mode of learning long since relegated to a bit-part role in most secular learning contexts.

Spurs for the title (and other Premier League 2013-14 predictions)

The new Premier League season starts in bang on an hour's time (as I type this) so I thought I'd post some quick predictions.  Feel free to agree, disagree, laugh in my face, bookmark this post for future laughing in my face etc. etc.!

First up, I'd love it if Spurs won the title this year.  They play good football, their manager is good (in both senses of the word, it seems to me!), and it'd just be a change.  If Soldado makes a quick transition from Spanish football to the Prem then I think they'll be challenging for the top three at least; up front is the only area that really let them down last season.  I'm not sure whether Bale stays or leaves will make much difference, as long as (a) it's decided soon, and (b) if he leaves they spend the money sensibly (which they probably will; Spurs don't seem to get diddled in the transfer market very often).

Being realistic, though, I'll pick Chelsea to win, followed by Man City and then Spurs.  Moyes has been giving 'Oh my word, I'm scared' vibes (as noted by Football365) and Man Utd still look flaky in centre midfield.  But have Arsenal or Liverpool got enough to challenge them?  I'm not convinced, even if Liverpool keep Suarez.  Actually. I reckon Liverpool might be better off without Suarez.  He's a great player, for sure, but when he plays everything goes through him; it seems most of the other players take a metaphorical step back and leave Suarez to work his magic.  I saw a couple of Liverpool's games late last season when Suarez was banned and they were great, full of purpose and creativity.  So I won't weep if he swans off to Madrid or wherever.

Anyway, here's my prediction for the top six:

And then...  Southampton for seventh place!  It's a bold prediction, I know, but I really can't see any other team nailed on to finish ahead of the Saints.  Perhaps Swansea; and I'd be happy with that as they play beautiful football and just seem like a nice, likeable club.  West Brom maybe; Norwich have spent quite a lot of money quite well, I think; Everton will struggle at first with Roberto 'My defences are always as leaky as a sieve' Martinez; and who else is there?  So, yes, Saints for seventh.  [Prepares to eat humble pie next Spring]
Posted by Kevin Sawers at 12:05 No comments:

The gospel according to Paul 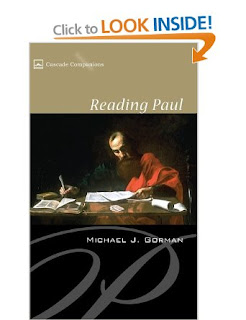 The New Testament letter-writer Paul is a guy about whom there are a wide range of views. Some see him as a raving misogynist, and there are a few passages in his letters that seem to back this up. For others, Paul was a legalist who emphasised personal morality and purity far more than Jesus did. Again, some portions of Paul's letters lend weight to this idea.

I'll soon be starting the second year of my theology Masters, with the first module being all about Paul and his theology. Our main course text is 'Reading Paul' by Michael Gorman; a book I wasn't familiar with but have been intrigued by as I start to dip into it. Gorman sets out to paint the broad sweep of Paul's theology and, while I'm sure he has something to say about the misogynistic and legalistic passages, it's the big picture I've been reading about so far.

Describing Paul as 'a proclaimer of the good news of God's intervention in human history through Jesus Christ', Gorman says this (introducing me to a new word in the process):

This good news was not a private message of personal salvation, though it included the salvation of individuals. It was a political announcement, or better a theopolitical announcement (politics involving God), that challenged – and challenges – the very core of how people relate to one another in the real world.

Gorman tries to summarise this overall message of Paul's with eight phrases, in an attempt to give a framework that might help us make more sense of what we read in Paul's letters. I'm looking forward to digging in to Paul's writings as I haven't really read them with a clear framework in mind and I do find such things help to increase my understanding.

Each element of Gorman's framework has a chapter in his book and I may well blog about some of them over the coming week. In the meantime, here are the eight elements:

My course starts back with a four-day residential block right at the end of August. We'll be focusing on this module about Paul's theology and I'm excited to find out what's in store!

Posted by Kevin Sawers at 01:35 No comments:

Kevin Sawers
Southampton, United Kingdom
I started this blog mainly to help me work through things from the theology course I've been on since September 2009. But I'll also post about other things I'm interested in, like politics, sport, music and chess. I hope you find something interesting here and please join in!